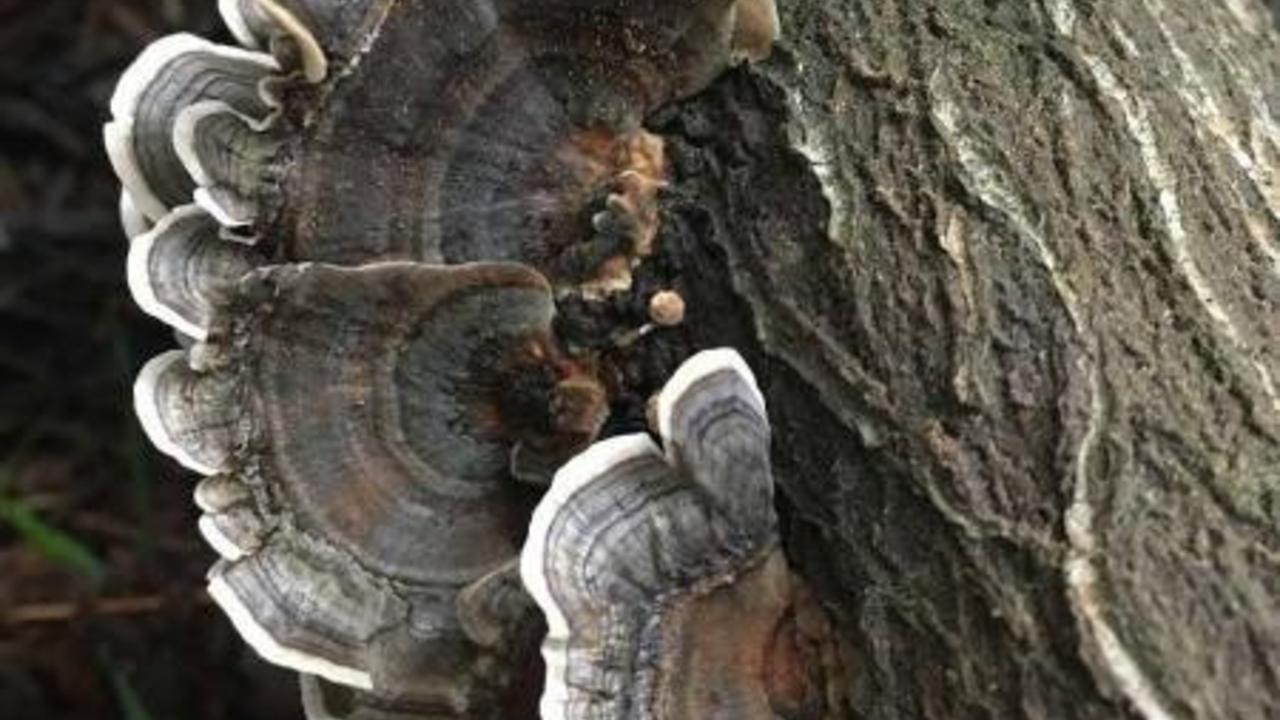 It is one of the most commonly found bracket mushrooms in the world, and can usually be seen growing as a parasitic fungus in tiers on dead stumps or old trees. You can find this mushroom growing in most parts of the world, and the colors will vary greatly- even within a very small area.

Basically what you are looking for is something that quite literally can resemble the fanned-out shape of a turkey's tail. Have a look at some of the color variations my daughter and I found within close proximity to each other.

Just a note on the color variation, I cannot definitively say this, but I would hazard a guess that the different colors will depend on what type of log the mushroom is growing on. Different timbers would have different mineral makeups as well as different chemical compounds which might throw up various colors due to their mineral content.

Being a 'polypore' mushroom, one of the best ways to differentiate this from other bracket fungus is by the pore-like structure it has on its underside. This is a close-up of the underside of a Turkey tail mushroom.

In order to harvest Turkey tails, you can quite literally tear the fungus off the host log, remembering (as you would in the plant world) it is best to take only the largest of them and leave the younger ones to grow. Turkey tail's role in the forest ecosystem is to accelerate the breakdown and decay of old wood back into the soil, so please remember to harvest sustainably.

Because of its parasitic nature in the wild, it has the ability to interrupt and steer its host trees' immune systems. It has been discovered that Turkey's tails have at least 9 antiviral constituents which are activated as the mycelium rots the timber.

These constituents are what translate over into its' medicinal applications, making it one of my favorite things to use in the clinic. Turkey's tail has been used extensively in China and parts of Europe to treat all things to do with immunity and (dare I say it, cancer), where it is used in either a tea or tincture form or whole dried powder. (Not just an isolated extract, but the whole mushroom).

Turkey tail exhibits a strong immuno-modulatory action, meaning that it has the ability to raise a lowered or impaired immune system, and also pacify an overactive one (like in the case of autoimmune diseases). For this reason, it can be thrown into the class of 'adaptogen' herbs. (A plant that has the ability to alter the body's processes and adapt to stress or environment).

It contains beta-glucans, (which have been well researched to help reduce LDL cholesterol), as well as something called mucopolysaccharides, or (MPS). These MPS act as a prebiotic within the gut mucosal, and it is here they help to modulate and support the immune system by stimulating the production of NK cells (Natural Killer Cells).

A quick search of google scholar will throw up hundreds of research papers on the promising trials of Turkey tail being used in conjunction with the drug interferon in autoimmune diseases such as MS and cancers, and there is also a lot of evidence to suggest that the use of medicinal mushrooms during the periods of chemotherapy treatment can have a protective effect and speed up recovery.

Aside from its mind-blowing immuno-properties, this little mushroom also contains proteins, many minerals, B vitamins, and Vitamin D. (Yes, all wild mushrooms are high in vitamin D).

Turkey tail really is a special little fungus and not just a pretty addition to the wintery forests of the world.