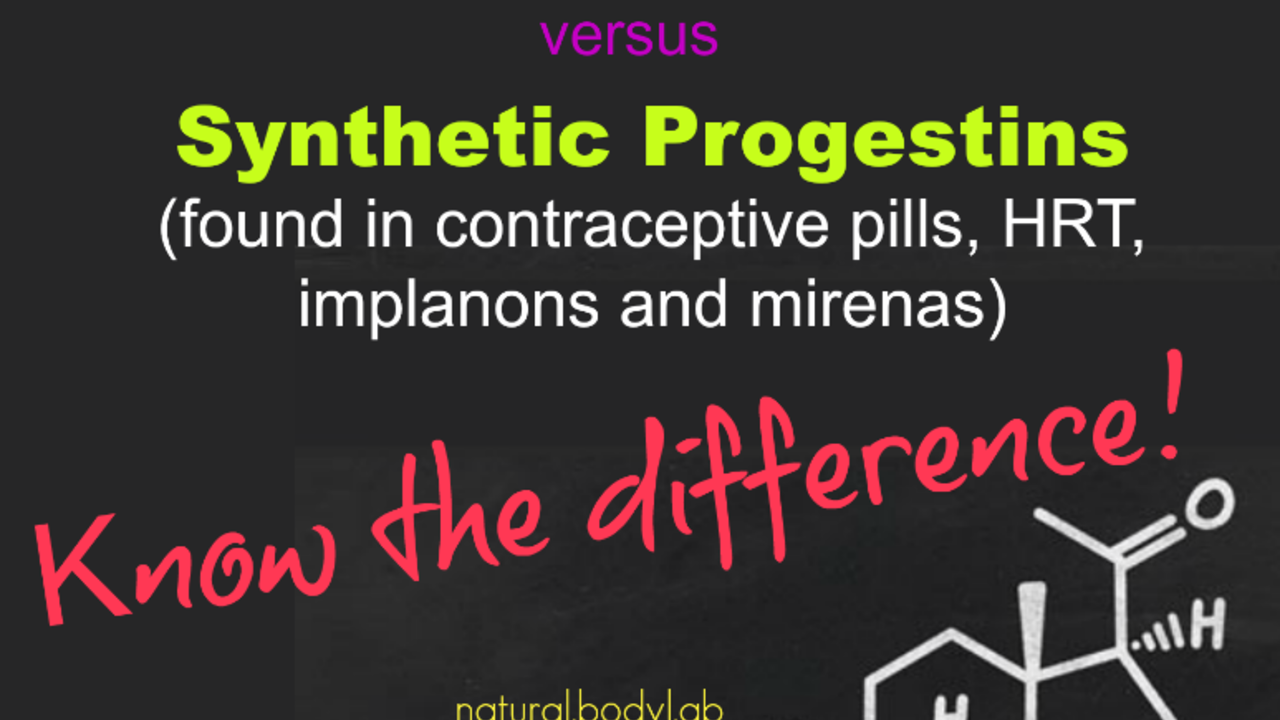 Over the last few weeks, the RCH put out a series of videos on the topics of women's hormones and contraception. Suffice to say that after watching two of them, I was left gobsmacked at the level of MISinformation that was relayed in them.

Two female "specialists" in the field, flicked loaded Q & A’s to one another and then proceeded to pull out false "evidence" and claims there was no research to back up people's concerns. They also repeatedly suggested across both videos, that the contraceptive pills, implanons, and Mirenas are absolutely safe, and there was NO evidence to suggest otherwise.

Today I wanted to shed light on the core issue of the videos, and explain why they were so misleading -the simple fact that every one of the claims made by the Professor and OB/GYN, were based around the hormone Progesterone- and actually, contraceptive devices in Australia do NOT contain bio-identical progesterone! They contain one of several synthetic Progestins, and I'm here to tell you that these are two VERY different things!

By definition, Progesterone is a natural hormone produced by the adrenal gland and the ovaries in women, and the testes in men. It has effects on various parts of the body including the endometrium, breast, brain, bones, and blood vessels. Progesterone is an integral part of the hormone balance and serves as a precursor hormone to other hormones such as cortisol, aldosterone, estrogen, and testosterone.

If derived from a plant source, such as Wild Yam, it is knowns as bio-identical Progesterone, because it will still contain the chemical structure which is identical to the hormone we produce as mammals.

Progestins are synthetically made and differ slightly in structure to Progesterone. (Even though they are close enough for our Progesterone receptors to accept them).

These synthetic Progestins do not always act the same way Progesterone would, and cannot be broken down by the body to produce other hormones. Often they are more potent than our natural Progesterone and are specifically designed to have a much longer half-life- meaning that they do not break down readily as Progesterone does.

Progesterone and Progestin have different benefits and side effects:

Some of the natural progesterone benefits are embryo survival and development in gestation, possible protection against breast cancer and endometrial growth/proliferation, increase in bone density, normalizing blood clotting, restoring libido, and acting as a natural antidepressant…

Too much Progesterone can produce excessive fatigue and listlessness. It relaxes us!

The brain is highly responsive to Progesterone. In fact, progesterone concentrations in the brain have been shown to be 20 times higher than in the blood. Insomnia, anxiety, and migraine are just a few of the conditions linked to an imbalance of Progesterone and Estrogen.

In the brain as elsewhere in the body, Progesterone counterbalances the effects of Estrogen. Whereas Estrogen has an excitatory effect on the brain, Progesterone’s effect is calming. Clinical and anecdotal experience indicates that women with Estrogen dominance sleep restlessly, whereas Progesterone replenishment enhances sleep.

Typically thought of as a female hormone, Progesterone can also be an invaluable tool in hormone modulation in men. Benign prostatic hyperplasia seems to be related to long-term exposure of the prostate gland to the strong androgen Dihydrotestosterone and possibly to Estrogen metabolites.

Progesterone has been shown to inhibit 5-alpha-reductase, the enzyme that converts Testosterone to Dihydrotestosterone. (Keeping Testosterone levels at their peak, and preventing prostatic enlargement, and hair loss).

Naturally, there will always be a case for the use of Progestins, and unfortunately, in Australia, there are no oral (or other) contraceptive devices that contain natural Progesterones. Purely due to their nature.

There ARE, however, natural forms of Progesterone when it comes to HRT.

It is important to be aware of the differences between the two different chemicals so that when your GP tries to explain how safe Progesterone is, you are able to differentiate that your contraception does NOT contain it at all!

Be aware of the possible risks and side effects, and try and minimize your use of them (so if there is an option, consider educating yourself on what these might be?).

Also, consider any familial/ hereditary issues that Progestin use may bring to the surface.

Knowledge is power... I just wanted to explain my observations from the videos shared.