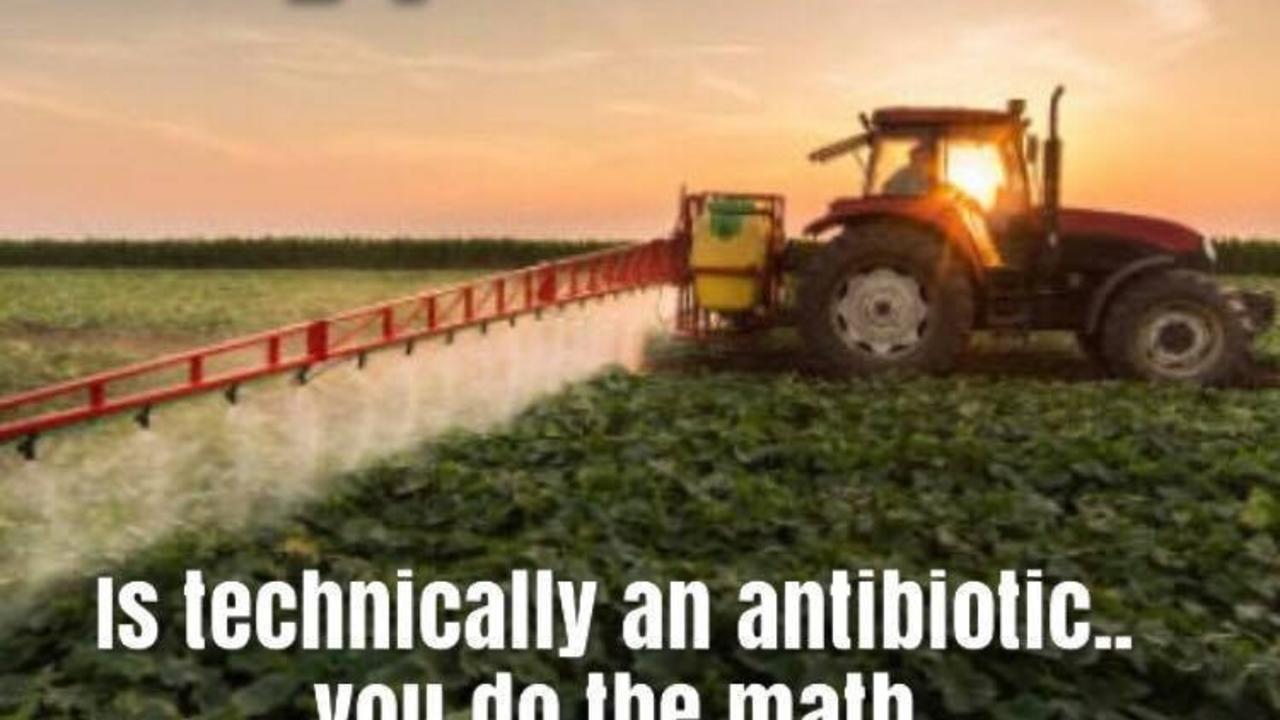 The Shikimate pathway is an enzymatic process used by bacteria, fungi, algae and plants, in order to make Folate. It is also responsible for the creation of three vital amino acids (tyrosine, tryptophan and phenylalanine), all of which CANNOT be made by animals, including humans.

Glyphosate was deliberately made to BLOCK the Shikimate pathway, and by doing so, it will also block bacteria’s ability to create these nutrients, which then creates the knock-on effect of depriving certain plants (or weeds) of the things they required for growth and reproduction. Hence its ability to be a ‘weed killer’.

In essence, however, Glyphosate is technically classed an antibiotic, as it kills off weeds by starving them of the nutrients which are normally produced by bacteria and fungi. It also kills off the bacteria and fungi by blocking their ability to replicate/reproduce, in turn destroying the entire microcosm of topsoil.

To explain a little deeper, just how vital these four main nutrients are to the entire food chain and animal kingdom, lets take a brief look at what a deficiency of each of them might look like:

Tryptophan: Is essential for Niacin production. Without it you run the risk of mental impairment, dementia, depression, Parkinson's, and gastrointestinal disturbances.

Folate: It doesn’t take much to know what a folate deficiency can do, with every pregnant woman being urged to supplement her diet with this vital nutrient. Folate is required for basic gene expression, neurodevelopment, methylation and detoxification at the liver level. Without good levels of folate, a plethora of diseases and conditions can arise.

It doesn’t take a rocket scientist to step back and look objectively at the statistics surrounding many of our neurodegenerative and behavioural ‘diseases’, and marry them to the sudden rise in the use of Glyphosates on such vast chunks of our food chain. In the year I was born, 1980, the autism stats were something like 2 in every 10,000 children in America were diagnosed on the spectrum. Today as it stands, that stat is around 1 in every 30 children.

A few years ago I wrote a couple of articles on the ideas around vaccination and autism, and really tried to outline that its SO important to consider a persons TOTAL TOXIC LOAD.

Consider that Folate is a massive factor when it comes to a childs' ability to detoxify literally anything out of the body, as well as replicate cells and basically develop correctly. Now consider that a massive number of children are probably eating folate-deplete, mass-grown produce.

The answer does not have to be supplements and pills.. The answer should lie in dramatic change across the way we think about our food and environment. We need to understand just how connected we are to those tiny fungi and bacteria who are systemically destroyed by Big Ag, and we need to figure out ways to protect this fragile ecosystem that is so evidentially protecting (and feeding) us. Plants are just the transport system! It’s the bugs which are really feeding us.